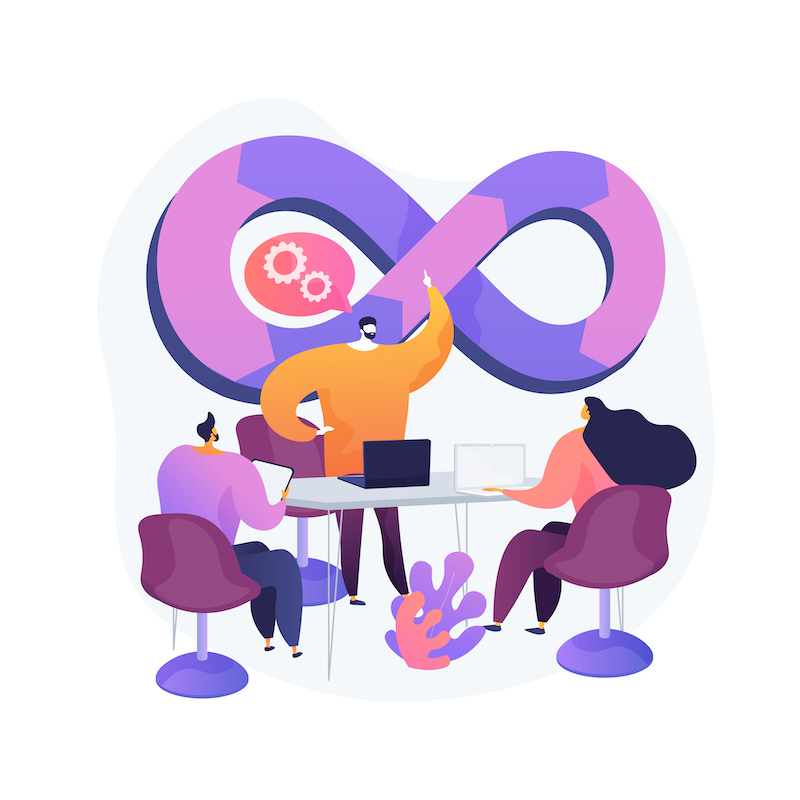 To organize your project data, you need to integrate your software development project with a version control system. Here’s why and how you do it.
By
Adelina Karpenkova
August 12, 2022

Overwritten code changes and untraceable errors — that's what you have without version control.

There’s no question about the need for version control for DevOps teams. The question actually is — how do you get started with it?

In this guide, we explain version control and give you everything you need to keep your data well organized.

What is version control?

Version control is the practice of tracking changes to computer programs, documents and files. In DevOps, version control involves managing modifications made to software code.

Monitoring project versions in software development is made possible with version control systems.

What is a version control system?

A version control system (VCS) is software that records changes in the code every time a commit is created. VCSs help software teams to keep records of all actions taken, allowing for more effective project management.

Before you start with version control, you and your team should learn its language. Here are some key concepts you should be familiar with.

How does a version control system work?

The process of working with VCS is very straightforward:

Is version control only for big teams?

Only one percent of software development teams report they don’t use version control. (Whoever these people are, they must be very confident in what they do.)

Version control gives developers a full context into what’s happening with their project. A VSC allows teams to backtrack issues, undo changes, track code ownership and experiment without the risk of ruining the original code. You’ve heard where there’s a will, there’s a way. Well, where there’s code, there’s the need for version control.

So yes, you need a version control system regardless of the size of your team.

Even if you’re the only developer working on a project, you need a VSC. You’ll thank yourself for this step when returning to a code you haven’t touched for a few months.

There are two types of version control systems: centralized and distributed.

In this approach, the entire team’s project lives on a centralized server. When changes happen, they’re sent to the central copy of a project.

Centralized version control systems require users to pull the latest project version from the server and download it on their machine. When ready, contributors push commits to the server.

The peculiarity of these systems is that they give full visibility into the code being under work to the entire team.

The pros and cons of CVCSs

CVCSs are easy-to-use and good for small teams. They’re good for basic workflows and don’t require much experience from your developers. Since there are only two repositories developers should be monitoring (i.e., the local copy and the server), it’s easy for everyone to keep track of the project.

Although they’re still widely used, these systems have serious drawbacks. The biggest issue is that teams rely too much on one server — if it’s down, all the workflows freeze.

Moreover, the risk of losing the source code is too high when all versions live on a centralized server. Lastly, the need of communicating every command with the server slows down the code development process.

Should you use a CVCS?

DVCSs are systems. In this model, the entire project history is mirrored on everyone’s computers. This way, a master copy of the code base is always on a client machine.

The distributed model makes it possible for two developers to work on the same source file simultaneously.

The pros and cons of DVCSs

Because they take the network's performance out of the equation, DVCs allow for managing and recording code versions offline. It means that your team can contribute to a project from anywhere in the world.

Also, it’s almost impossible to lose the source code with DVCSs. If a server runs down, any project copies can restore the lost information.

Compared to centralized version control, DVC almost doesn’t have drawbacks. The only thing worth mentioning is that DVCSs are harder to understand than centralized systems — but it shouldn’t be an issue for an experienced DevOps team.

What can go wrong without a version control system?

Say you don’t have time to implement a version control system right now. What happens then?

Impossible to roll back to previous versions

There’s no way to generate backups without version control. Not being able to roll back, you can’t secure your source code and experiment freely.

If new codes have bugs or cause user complaints, you can’t just restore a previously working version of the app.

You may also accidentally delete pieces of code — when it happens to a project without version control, you need to rewrite the lost code manually.

Version control systems create backups of all the code versions at every stage of development. With multiple backups on different machines, you can secure your data and recover previous versions of code anytime.

Without a version control system, working on the code collaboratively is a disaster.

Collaborators can’t follow each other’s work and understand the reasons behind specific changes. The lack of version control increases disruptions, creating the need for never-ending team meetings and clarifications.

It’s also hard to understand who does what, assign tasks and manage projects. It’s impossible to track the progress of junior specialists or evaluate the contribution of specific members to the project. You have no insight into how your team works and develops if you don’t use version control.

With a strong version control solution, software teams can quickly assemble all critical project files and foster actionable communication to improve code quality. Stakeholders from different teams can collaborate to build innovative solutions - from product managers and designers to developers and operations professionals.

Version control helps to coordinate work across software development teams, enabling them to work in distributed and asynchronous environments. It’s the only way to effectively manage changes in code, automated testing, and code versions, resolve problems and set the trajectory for the dataset.

A version control system stores evidence of all changes and revisions being made since the beginning of a project. It lets developers trace the development of files through various stages. All the code changes as well as the details on who and when made them can be tracked through a VCS.

Without it, you aren’t able to understand the causes behind errors arising and fix them fast. The source code isn’t protected from human error or the consequences of unsuccessful experiments.

Instead of improving the code and creating better apps, your team spends all of their time on revisions, troubleshooting and overcommunication.

Version control software for your team

Only four percent of teams build custom version control solutions for their needs. The other 96 percent use one of the systems listed below:

On G2, Git is called the “number one easiest to use version control software.” Indeed, despite a robust feature set, the system is very easy to learn (and this is the word of a content marketer who learned to navigate Git in a few weeks).

Git integrates with Atom, Sublime Text, Visual Studio Code and other code editors. And since it’s a DVCS, teams can work with it offline.

The system provides strong support for non-linear development and is capable of efficiently handling small to large-sized projects. It’s fast and easily maintainable by teams of any size. On the downside, in complex projects, it becomes difficult to understand a bigger history log.

Mercurial is a distributed version control software supported on Microsoft Windows, Linux, FreeBSD and macOS. Mercurial is a simpler system than Git. Due to a more intuitive command syntax, it’s considered safer and easier for less experienced users.

Mercurial supports multiple workflows, and its functionality can be easily enhanced with extensions. Yet users report working with extensions in Mercurial isn’t the easiest task.

Mercurial and Git are interchangeable, your choice of the right system depends only on your own preference and level of experience.

SVN, or Apache Subversion, is a centralized version control system. It stores all files and data on a central server, tracking changes in source code and files for all kinds of projects.

SVN’s file-locking system helps you to prevent issues that arise when multiple developers are making edits to the same file at the same time. The model is very beneficial for enterprise-size projects with multiple non-mergeable binary assets in the database.

The difference between Git and SVN is that the latter doesn’t create local project copies on each machine it operates on. So if the central repository runs down, nobody can continue to work on the project until the problem is fixed.

CVS is one of the oldest version control solutions in the market. It’s a straightforward open-source system that maintains your source code and facilitates the revision process.

CVS follows a client-server repository model, enabling distributed DevOps teams to collaborate effectively. To save you a large amount of disk space, CVS combines all file versions into a single file in a way that only the differences between the revisions are stored.

Unlike SVN, the system allows more than one person to contribute to the same files at the same time.

Perforce Helix Core is one of the most reliable source code management systems. It’s a great solution for massive teams working with thousands of branches. It’s lighting fast, scalable and safe.

It empowers large teams by providing workflow freedom where developers can work independently but have total control over projects by setting granular file-level permissions.

Perforce Price: Perforce Helix Core is free for up to five users and 20 workspaces.

Bitbucket is a Git-based version control system for teams that use Atlassian tools. It integrates with Atlassian services like HipChat, Jira and Bamboo.

Bitbucket Price: Bitbucket is free for up to 5 users.

It's critical to implement version control — but it's not without its challenges. You need to train your team on how to use the VCS to keep your database organized and avoid branching mess. You need Scribe.

Scribe is a tool that auto-generates step-by-step guides for any process. It’s a perfect supplement to your version control software. It works as a browser extension or desktop app, turning any workflow into an SOP, complete with text and screenshots.

Scribe automatically follows what you click and type, documenting your code for you. As you make changes to code or systems, you can change any step in the Scribe. Those updates will automatically populate wherever that guide is shared or stored. Now you’ll know that the version you’re using is the right one.

Scribe Price: Scribe has a free Basic plan that lets you make unlimited guides with the browser extension.

Get started with version control

You need version control regardless of the size of your team. With it, you’ll control your projects, enable team collaboration and speed up the development cycle.

Once you’ve chosen a version control system, create your first Scribe to guide your team through the setup process.